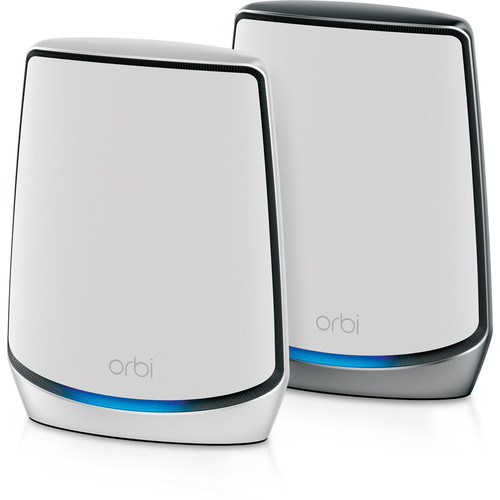 The RBK852 Orbi AX6000 Wireless Tri-Band Gigabit Mesh Wi-Fi System from Netgear is engineered to deliver extremely fast and reliable network speeds with up to 5000 square feet of coverage. The system consists of a router and one satellite to let you expand Wi-Fi to more of your home. The system is capable of a total 6000 Mb/s of throughput via Wi-Fi 6 (802.11ax). Clients have access to a 2.4 GHz signal for up to 1200 Mb/s or a 5 GHz signal for up to 2400 Mb/s.

Another 5 GHz signal delivers 2400 Mb/s to the router and satellite via a dedicated quad-stream backhaul. This is meant to allow for fast communication between the network without interfering with client network access. This speed is meant to help support stable 4K and 8K video streaming. To achieve this kind of speed and coverage, Netgear has incorporated 8 internal antennas with high-powered amplifiers, all powered by a 2.2 GHz quad-core processor.

This Wi-Fi system supports both beamforming and MU-MIMO technologies to help maximize speed and ensure a reliable connection. Beamforming actively directs the internal antennas to focus on the devices accessing the system via either band, while MU-MIMO gives multiple users multiple dedicated network connections.

Both the router and satellite act as one system so you can roam between each device's coverage area without losing connection.

The Orbi supports both Amazon Alexa and Google Assistant to allow you to manage the network via voice commands. Ask either digital assistant to pause Wi-Fi, turn on the guest network, and more.

Download the Orbi app for IOS and Android mobile devices for wireless network management via an intuitive graphical interface. Here's just some of what you can do with the Orbi app: