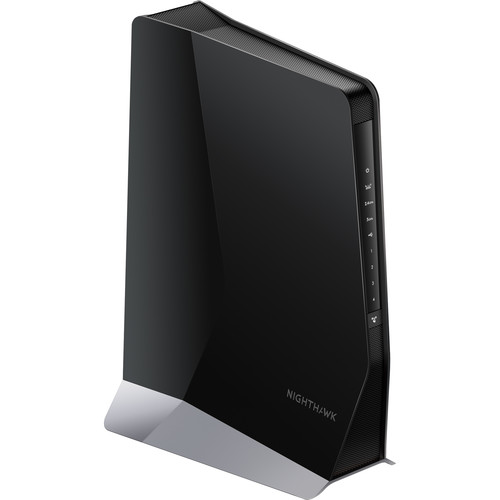 Enhance your 802.11ax Wi-Fi coverage by using the Netgear EAX80 Nighthawk AX8 Wi-Fi 6 Dual-Band Wireless Range Extender to create a mesh network. The Nighthawk AX8 has four internal antennas and works with your existing router by using the same network name (SSID), allowing for seamless switching between devices as you move without having to disconnect and reconnect to the wireless network. Compatible devices can reach speeds of up to 1.2 Gb/s using the 2.4 GHz band and 4.8 Gb/s across the 5 GHz band, allowing for reliable high-speed connections for streaming 4K video, playing games, connecting smart home devices, and more throughout your home. OFDMA technology allows for optimized data transmission for up to eight devices at the same time while four-stream MU-MIMO support enables up to four 1 x 1 devices to stream content simultaneously.

For those who haven't upgraded yet, this range extender supports previous Wi-Fi standards such as 802.11ac. Four Gigabit Ethernet ports are also available to connect wired devices such as smart televisions, computers, and video game consoles. There is also a USB 3.0 port to connect compatible storage drives and share photos, videos, documents, and other files across the network. Downloading the Nighthawk mobile app allows you to configure the Nighthawk AX8's settings.

The Nighthawk AX8 expands the wireless coverage of existing routers and uses the same network name, allowing devices to work seamlessly as you move from place-to-place.

With OFDMA technology, the Nighthawk AX8 can efficiently transmit data to up to eight devices at the same time. It also supports up to four simultaneous 1 x 1 Wi-Fi streams.

Four Gigabit Ethernet ports are available to connect wired devices such as smart TVs, video game consoles, and more. There is also a USB 3.0 port for connecting external storage devices.